Ascentra Credit Union headquarters a boon to the Bettendorf community New light-filled headquarters a “living work of art” that demonstrates Ascentra’s commitment to community and employees, showcases the Mississippi River

When people on Grant Street pass by Ascentra Credit Union’s new headquarters, they are likely to see a first-floor room whose bright orange and aqua walls set the backdrop for the activity within. What these passersby might not know is that those within this room might not necessary be Ascentra employees. Rather, the Lensmeyer Learning Center (named after former Ascentra president and CEO Paul Lensmeyer who died unexpectedly in 2013), exemplifies the organization’s focus on community—Ascentra has opened the conference/seminar room as a resource for local organizations.

The 40,000-square-foot headquarters, designed by Legat Architects and built by Russell, not only reinforces Ascentra’s community commitment, but also paves the way for a regional advancement. The Quad-City Times called it “a hallmark for Bettendorf, its downtown and the Quad-Cities.” Most of the façade uses fiber cement panels, which create a contemporary look similar to metal, but save construction costs.

Additionally, the facility proves the organization’s enthusiasm for providing employees (and recruits) with an energetic place to work. Among its highlights are stunning views of the Mississippi River, light-filled collaboration spaces, a “zen room” with resources for nursing mothers, and even a rooftop patio accessible from the breakroom.

In the Quad-City Times article, Ascentra Vice President of Business Development Alvaro Macias said, “It’s like a living work of art for us.” The four-story facility, among the tallest in Bettendorf, optimizes views toward the Mississippi River and the new I-74 bridge (connects Iowa and Illinois) now under construction. It also announces the Ascentra brand to those approaching on the bridge.

“It’s so gratifying to have a facility that reflects our staff and the great job they do serving our membership,” said Ascentra CEO and President Dale Owen at the August 2019 ribbon-cutting ceremony. “This will help us grow the credit union and serve our membership and communities much more effectively for decades to come.”

According to Chief Marketing Officer Jennifer Naeve, since the facility’s completion in August 2019, it has “provided efficiencies within each department and has fostered collaboration. There is a heightened sense of culture and more space in which to celebrate it.” After nearly 30 years in its previous headquarters spread out over several dated buildings, Ascentra had run out of room—it needed more space to house support staff for its ten branches, located in Iowa and Illinois, and to service its 39,000 member-owners.

“There was just too much going on in too small an area at the old facility,” said Ted Haug, lead designer at Legat. “Complicating things, the spaces weren’t designed for what they were being used for.”

The new building consolidates all functions under one roof and offers much roomier spaces customized to meet employee needs. It includes a branch bank on the first floor, open offices on the second and third, and executive suites on the fourth. The south side drive-through canopy doubles as a rooftop patio that employees access via the breakroom. The Mississippi River sets the backdrop for those looking out from the patio and the upper floors.

Views in and Views Out

The orange towers that spark the Bettendorf skyline and the organization’s distinctive building-block logo announce the Ascentra brand to those approaching the city on the new I-74 Mississippi River Bridge that connects Illinois and Iowa.

Haug said, “Ascentra’s image was a critical factor in the design. We thought a lot about what people would see as they traverse the bridge and as they enter the facility.” Glass along the north side activates the façade at street level. The ground level displays the Lensmeyer Learning Center open to community organizations. In addition to the towers, the exterior features a curving roof element inspired by the organization’s logo. Within the facility, the brand becomes apparent in everything from the orange streaks in the carpeting to the cheerful employee photos that decorate partitions and stairwells.

The facility not only brings natural light to employees and customers, but also displays downtown Bettendorf and the Mississippi River, which is a quarter mile to the south. Most common areas (e.g., breakroom, fitness room, roof deck, conference rooms) face the river. This is a marked difference from the old facility, which had few windows.

To optimize natural light, Legat designers specified most of the glass on the north and south sides, but toned down the glazing on the east and west façades to reduce the impact of the direct (and more distracting) sunlight. An employee breakroom accesses the outdoor patio above the drive-through. 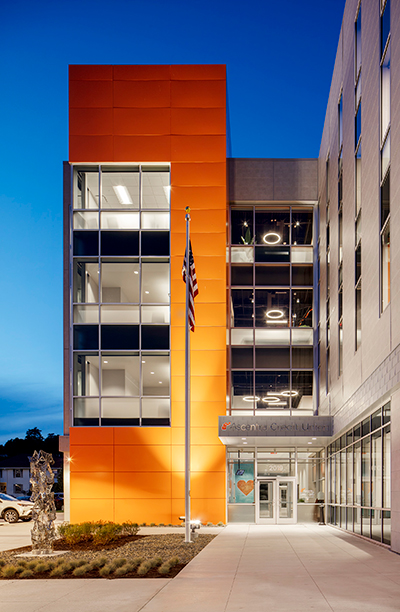 From the project’s inception, Ascentra was adamant about it giving back to the community and evolving downtown Bettendorf.

At the dedication ceremony, Bettendorf Mayor Robert Gallagher said the facility would “spur development,” calling it the “cornerstone on the western edge of town.”

Haug added, “It would have been so easy for Ascentra to find a new site outside of town and build this facility just as easily as they did here, but they made a commitment to the downtown area and the betterment of Bettendorf.”

And when the time comes for the organization to expand, Ascentra will be ready—the facility is designed so that a mirror of it can be built on the site’s other half.

Owen said, “I don’t know that you can point to too many cooler, more creative, or more connected projects than what we have right here in downtown Bettendorf and we’re really excited to be a part of that.”