When Congregation Beth Am sold its synagogue in 2012, it wanted the building to continue to benefit the Buffalo Grove community. Six years later, on a sunny Sunday afternoon, over 200 residents gathered to the celebrate the facility’s rebirth as the Buffalo Grove Community Arts Center. Supported by a sophisticated lighting and sound system, resident performers of all ages entertained their neighbors with everything from Broadway excerpts, to soaring contemporary dance routines. A lobby wall displays words extracted from a community survey about what the new Community Arts Center represents to them.

Buffalo Grove Park District Executive Director Ryan Risinger kicked off the grand reopening ceremony by thanking the many individuals who made the project possible. Scott Jacobson, Park District Board President, served as master of ceremonies.

Jacobson said, “What you’re seeing today is the result of hard work and a lot of fun.” On their way to the main event, theatergoers pass through the Hyman and Miriam Reiner Gallery featuring artwork created by Buffalo Grove residents.

At the Community Arts Center, designed by Legat Architects and built by FH Paschen, creativity doesn’t stop on the stage. As patrons walk the corridor that leads to the theater, they enjoy resident-created artwork in the Hyman and Miriam Reiner Gallery. Another corridor and the main lobby display plaques and posters, highlighting past and future musicals performed by Big Deal Productions, the Park District’s national award-winning theater program. “Buffalo Grove has some tremendous talent,” said Jacobson. “But it’s not just about talent; we’re giving every person, regardless of age, the opportunity to live out their dreams.” Community members begin to fill the theater for the June 24, 2018 grand reopening of the Buffalo Grove Community Arts Center.

The $3.3 million project was made possible in part from a $1.73 million grant from the State of Illinois’ Park and Recreational Facility Construction (PARC) Grant Program. The project is also pursuing LEED (Leadership in Energy and Environment Design) certification with the U.S. Green Building Council. Because the project is a retrofit (it converts a facility from one use to another, instead of demolishing and building new), it exemplifies environmentally-conscious construction. Porcelain tiles highlight the main public spaces, such as the concessions area, theater, and box office, as well as displays.

In the building’s former life as a synagogue, its corridors and gathering areas had standard pendant lights and exposed piping spread across high white ceilings. Today, the circular clouds and electric blue light rings that descend from the black ceiling appear to float above theatergoers.

“We wanted the ceiling and piping to fade away,” said Ted Haug, head of design at Legat. “The new ceiling design elements create a sense of drama and reduce the scale as people approach the theater.” Multipurpose space, divisible with partitions, accommodates pre and post-performance gatherings. It is also used along with the concession/prep area as rental space for wedding receptions and other community events.

However, these flourishes and many others were not present when the Community Arts Center moved into the space in 2014. That’s because the project was completed in four phases. The first three phases included a partial theater renovation, a new vestibule, office area, new roof, and exterior plaza. Phase four, completed this summer, introduces further theater upgrades, as well as a new lobby, box office area, concessions area, scene shop, and multipurpose areas. The fourth phase also includes a new HVAC system. Future phases will expand parking and create a new playground area. Single occupant unisex bathrooms greet visitors with an “Admit One” sign that resembles a theater ticket.

Within the theater, the most recent round of renovations brought tiered seating to improve views for patrons, as well as upgrades to the lighting and sound systems. Additionally, the theater’s back wall moved back about ten feet. This not only raised the number of seats from 339 to 360, but also allowed for an ADA accessible, elevated control booth. Previously, the control booth’s location was at the same level of the audience, making it difficult for its operators to see the stage. Raising the booth also opened storage space for tables, chairs, and equipment. 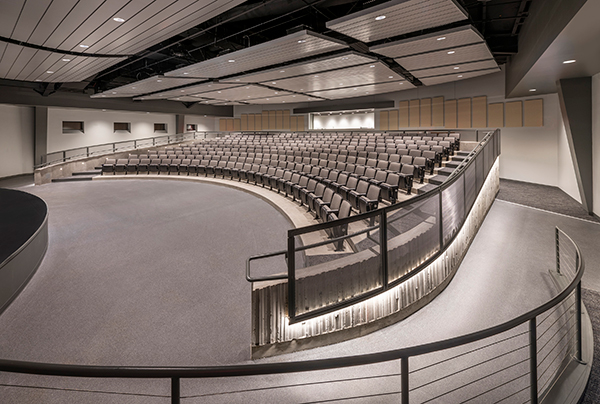 Among the theater upgrades are acoustic clouds, a new control booth, and a transparent metal mesh that surrounds the audience and keeps views open.

One challenge involved the lower-than-average theater ceiling height: the team didn’t want to create an oppressive feel by wrapping a solid wall around the seats. Instead, designers used a metal mesh, along with a base of form liner concrete with a textured pattern.

Haug said, “The transparency of the metal keeps views open, while the uplit concrete conveys a sense of mystery and anticipation for the performance to come.”

The gray “clouds” that stretch across the ceiling are another theater highlight. Some are perforated, some are angled, and some are flat; but, they all work together to optimize acoustics. During smaller performances, part of the lobby can be partitioned off for classes or other activities.

Risinger said, “There’s something for everyone here, whether that means joining a performance group, getting private instruction, taking classes, or simply enjoying a show.”

The center is also in high demand by community members looking to hold private events, ranging from cultural celebrations, to wedding receptions. The District has even partnered with Northwest Special Recreation Association, which caters to those with special needs. A program called “Theater for Thought” promoted awareness and understanding of mental illness.

Last season, the incomplete theater had combined performance sales of about 13,000 tickets. This year, with the fully realized theater, Risinger anticipates even more.