Two Mariano Azuela Elementary School students and architect Tom Kikta look over the rail on the school’s gym roof. The girls hold eggs surrounded by protective devices that they’ve made. Two stories below, 28 other students wait on the ground. The girls drop their devices … Members of the Azuela Architecture Club use toothpicks and marshmallows to build a tower.

These sixth through eighth graders are members of the popular Azuela Architecture Club. The afterschool program started ten years ago, just after construction completed at the West Lawn neighborhood school. Since then, more than 400 club members have done activities ranging from sketching landscapes and assembling gingerbread houses to building towers out of toothpicks and mini marshmallows.

The story of the club’s launch and longevity shows how a school principal and an architect have given Azuela students an opportunity to explore . . . and perhaps laid the groundwork for many future architects and engineers. Back in 2010, when construction of the new school was 30% complete, principal Carmen Navarro shared her vision of the club with Legat Architects’ Kikta, architectural project manager of the new school. Kikta said he was interested, but completing the building was a priority.

The next week, Navarro approached Kikta again. She said, “I want to start an architecture club; would you be interested in helping out?”

Kikta responded, “Yes, we’re definitely interested, but let’s get the building built first.” A variation on this dialogue continued each week throughout construction. On the first day of the new school, Richard M. Daley came for his last bell-ringing ceremony as Mayor of Chicago. Naturally, the press was there. During her speech, Navarro complimented Legat for its design of the school, then stated that the firm “will be running an architecture club.”

After the ceremony, Navarro approached Kikta and said, “You heard what I told the community and the press about the club, right?”

Kikta said, “Well, now that you have it on tape, I suppose we better get started.”

Ever since, Kikta and his coworkers have met with the Azuela Architecture Club
every Thursday afternoon during the school year from 3:15 to 4:15.

That first year, about 20 students enrolled, but the numbers have grown steadily. This year, the club has more than 70 members. Azuela Architecture Club members learn about the design of their school from a member of the architectural team.

Fun with Shapes and Numbers

Kikta uses each club project to teach an architectural lesson. For instance, the egg-dropping experiment allowed him to talk about industrial design and structural engineering. To test their inventions, the students and Kikta headed up to an opening in the second floor. All the eggs broke . . . except for those of the two girls. That led to the higher challenge on the gym’s green roof. When they reached the ground, both girls’ eggs remained intact. One girl suspended her egg in a three-liter plastic bottle stuffed with netting. The other had a parachute contraption. “I could have dropped that one off a high-rise,” said Kikta of the latter, “and its egg wouldn’t have cracked.”

During one session, Kikta or a coworker takes students around the building and explains how the Fibonacci sequence (i.e., a mathematical series of numbers) inspired the design. Students see the sequence played out in the floor and brick patterns.

One year, Kikta and coworkers took the Azuela Architecture Club on a tour of Chicago’s Michigan Avenue. This year, he hopes to take the students to the construction site of his current project: the new Hancock Replacement High School just two and a half miles northeast of Azuela.

Lessons with a Pro

Over the years, Kikta and club members have developed a mutual respect. “Because it’s an afterschool program,” he said, “students are there because they want to be, not because they have to be.”

As the holidays approach, Kikta enlists one of his sisters to make the gingerbread pieces—students bring frosting and candy—that the club uses to build their models. And what are they building? The Chicago-style bungalow, the very home that lines the streets of their neighborhoods. During early years, the club experienced a couple collapses. Today, Kikta has it down to a science—his biggest challenge is keeping the students from eating their building materials.

One year, Kikta had students use straws and tape to build bridges. Supplied with his own quarters to test the bridges’ strength, he made the club a promise: the winner would get to keep all the quarters their bridge would hold. One particularly inventive student—a future engineer, perhaps—walked away with $80!

Another exercise challenges students to sketch images of landscapes. Kikta points out one striking difference with this exercise: it’s the only time during which the class is completely quiet.

Navarro has observed the club’s impact. She said, “How many kids can say, ‘I attended an architecture club with an architect?’ Tom has been so wonderful.” A Legat employee talks with the Azuela Architecture Club during a Michigan Avenue tour in downtown Chicago.

According to Illinois Report Card, 97% of Mariano Azuela students are Hispanic and 84% come from low-income families.

Navarro, keenly aware of the challenges her students face, has prioritized giving them opportunities to explore different potential careers. It was this focus that led to the birth of the Azuela Architecture Club.

“This is about equity,” she said. “A lot of our students have relatives working construction, so the club gives them an opportunity to learn about the building industry from a different perspective. It gives them inspiration, vision, and hope.” 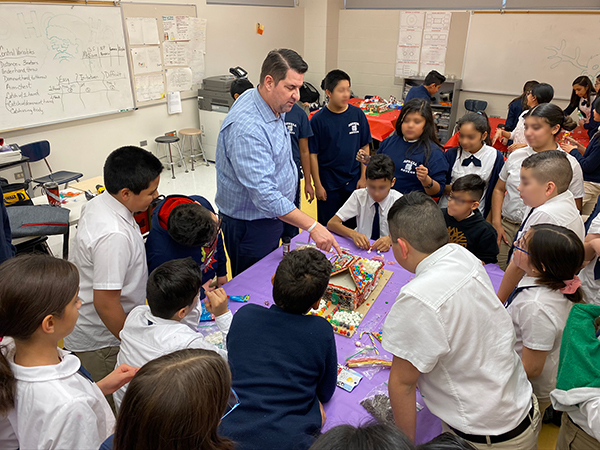 When the club meets for the first time, Kikta gives each student a sketchbook to capture their ideas. Several students have impressed him with their creations: there was the girl with a talent for graffiti-like art, and the boy whose drawings looked like tattoo art.

One student surprised Kikta after just two sessions. “Hey, Mr. Tom,” he said. “Do you have any more sketchbooks?”

The boy handed him his sketchpad. “I finished mine.”

Kikta flipped through it, complimented the young man, and then got him another.

Students frequently tell Navarro they want to build bridges or design buildings. Many club members take high school courses based on their experiences in the architecture club. Navarro is also pleased to see more girls joining the club than ever before. One club member even said, “Ms. Navarro, the triangle has changed my life!”

In terms of the club’s future, both Navarro and Kikta are in it for the long haul. “It’s hard to believe it’s been ten years,” said Navarro. “We’re not letting Tom go anywhere.”