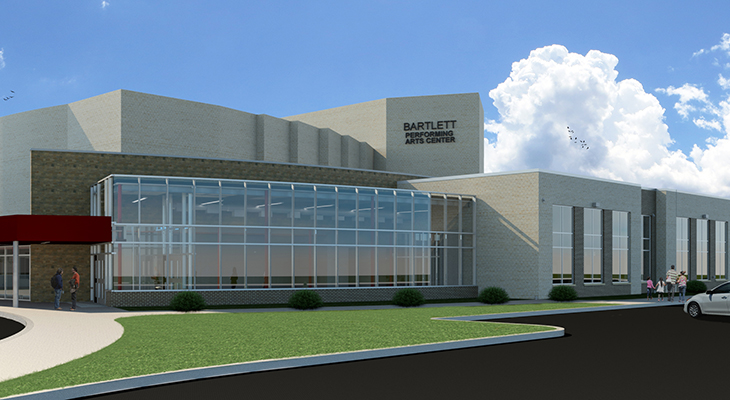 Insurance executive Robert E. Bartlett (1927-1998) loved the City of Moline. He supported the regional arts scene, and anonymously donated to causes that helped economically disadvantaged students in the area.

On January 9, 2018, teachers, students, and dignitaries gathered at Moline High School to kick off construction of a project that will honor the philanthropist’s legacy—the Bartlett Performing Arts Center.

The Robert E. Bartlett Foundation is funding roughly 65% of the $11.75 million project, which will not only benefit high school students and faculty, but also the entire city and Quad Cities region. The foundation and Moline-Coal Valley School District 40 expect the facility to draw more professional performers and enrich Moline’s cultural offerings. The foundation’s selection of Moline High School followed a thorough search of potential venues. Dr. Deborah Bracke, foundation chairman, said, “The combination of education, the arts, and the high school’s central location within the city presented the perfect triangulation.”

Over 35,000 square feet in renovations and a 10,000-square-foot addition will feature a completely remodeled auditorium, along with new dressing rooms, a scene shop, music and choral rooms, and a multipurpose room that can be used as a “black box” theater for smaller performances.

Legat Architects’ (Moline) design of the facility integrates input from high school students and staff, as well as the foundation. The project is getting built by Russell (Davenport) and is expected to finish in January, 2019.

No More Peekaboo: A Stadium-style Revival

The auditorium had changed little since Moline High School was built in 1958. To sit in the back was to feel disconnected from the performance—it was hard to hear, and hard to see what was happening on stage.

“The auditorium was a constant problem,” said Dan McGuire, principal of Moline High School. “The district places a high value on the arts, and our venue was subpar.”

McGuire listed among the facility’s shortcomings dated technology, lighting, sound, and acoustic systems, as well as a lack of access for people with disabilities. The district did “patch jobs” over the years, but wiring problems inevitably led to setbacks. For instance, students in the sound booth had to use a phone to communicate with stage hands. “Scalloped” walls in the existing auditorium weaken acoustics. Construction will replace the scallops with a smooth wall for better transmission of sound.

Legat’s Zach Whitmire said, “The auditorium was designed more as a lecture hall than a performing arts venue. That caused many dead zones, plus it was hard to see in back because the floor wasn’t sloped enough.”

All these problems will disappear when the auditorium is gutted, remodeled, and outfitted with advanced audiovisual systems.

Bracke said, “The overhaul and expansion will create an auditorium that is not only beautiful, but also state-of-the-art.”

One major improvement will be the change to stadium-style seating with a more prominent floor slope. Moreover, the renovations will straighten the auditorium’s “scalloped” walls to improve acoustics.

According to Whitmire, those in the back of the remodeled 800-seat auditorium “will enjoy crystal clear sound, plus they won’t have to play peekaboo between people’s shoulders.” The stadium seating also creates a more intimate theatergoing experience.

For the first time, those with disabilities will have access straight from the seating area onto the stage. The auditorium will also have designated seating for people in wheelchairs.

Replacement of the entire ceiling system will bring a wider (three feet) catwalk and new theatrical lighting. Four large wood veneer “clouds” will stretch between the stage and the back wall of the auditorium. The clouds add aesthetic appeal and improve acoustics.

McGuire said the Bartlett Performing Arts Center will expand educational opportunities “not just for the performers, but also for students interested in set design or audiovisual careers. With the up-to-date sound and lighting technologies, students working in the crew will have more real-life, hands-on experience that will help build interest in these fields.”

The performing arts center will have the capability to be closed off from the high school to transform it into a standalone venue for professional performances. 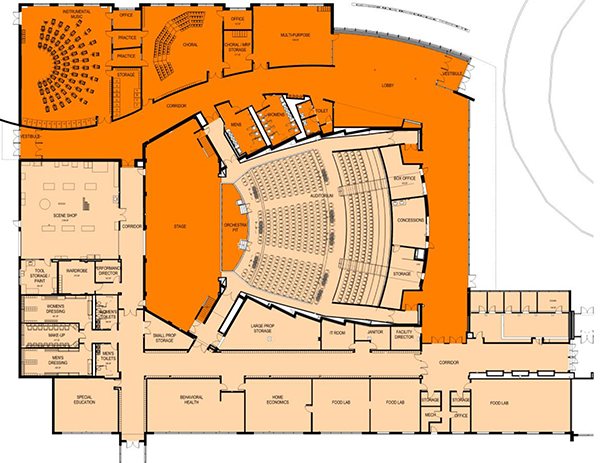 Dressing Up and Making a Scene

Dressing rooms, located in the basement, felt more like emergency shelters, according to McGuire. Water was a recurring issue—fear of water damage restricted storage capabilities. For some productions during the rainy season, students had to use ground level classrooms as dressing rooms.

The renovations will bring the dressing rooms up to the space currently occupied by the choir room. No more dressing in the basement.

Another problem: the absence of a scene shop forced set construction to happen on stage. McGuire said, “We’d have to black out the stage calendar for set construction for the days before and after performances.” That meant losing other teaching and practicing opportunities.

Construction will transform the old band room behind the stage into an authentic scene shop. A 12-foot-high garage door will allow students to wheel scenes directly from the shop onto the stage. Another scene shop garage door will open to the outside for delivery of materials.

Both the foundation and the district stressed that the performing arts center should have a “wow factor” beyond the auditorium. The solution comes in the “river wall,” inspired by Moline’s location amid the Mississippi and Rock rivers.

The dark stone wall, which joins the addition and the auditorium, starts at the main east entry and winds its way through the lobby and corridor, leading to the west entry. Additionally, a glass wall will create a beacon that showcases nighttime lobby activity.

Bracke said, “The expanded lobby will provide a gateway to the theater, showcase the fine arts, and create a feeling of community and celebration.” The design of the Bartlett Performing Arts Center incorporates many ideas from the design committee, which included Moline High School students and staff, as well as representatives of the Robert E. Bartlett Family Foundation.

Design Involvement from the Get-go

The design of the center was inspired by input at design charrette sessions that occurred throughout the summer. Those who participated included high school teachers and administrators, three students, and representatives from the Robert E. Bartlett Family Foundation.

Bracke said, “It was an inclusive process. We were at every meeting and our voices were heard to create a design that balanced our dreams with the reality of the budget. I think Mr. Bartlett would be quite proud that it was such a genuine collaboration where ideas could flow and grow.” View of stage from 800-seat auditorium

Moline Is in for a Treat

During performances at Moline High School, students would sell snacks at folding tables outside the home economics classroom. This makeshift concession stand was symptomatic of a larger problem—the facility, despite the place it held in the hearts of many community members, felt out-of-date and amateur.

In January of 2019, the Bartlett Performing Arts Center will raise the curtain to a genuine theatergoing experience replete with a spellbinding auditorium, a vibrant lobby, and of course, an actual concession area.

“From the moment they walk into the facility,” said McGuire, “people will experience a setting that is intimate and welcoming. They will also grasp the value the district places on the arts and what they bring to students and the community.”