In the 1930s, Blue Island, Illinois, residents headed to the A&P on Western Avenue to do their shopping. Little did they know that nearly 90 years later that same building would stand as
the Education Center at Blue Island, serving students living in the southeast corner of Moraine Valley Community College’s (MVCC) district. The college started offering classes on the first floor in 2004. It purchased the building in 2011, when it renovated the second floor. This year, MVCC completed a third floor renovation that brings the Blue Island community, just 18 miles south of Chicago, one step closer to becoming a full-fledged medical district. On February 20, 2018, medical beds and vibrant blues and greens surrounded the more than 100 people who gathered in the BNAT (basic nursing assistant training) Lab to celebrate completion of the project, funded in part by a Department of Education grant.

Domingo Vargas, Blue Island mayor, said, “We want Blue Island to become a medical district. This is one little notch that shows it’s on its way.”

The college already has partnerships with Metro South Medical Center, which is across Western Avenue.

“This space will be a welcoming learning opportunity for everyone,” she said, “but particularly for the large minority populations that live in the neighborhoods closer to this center. The healthcare institutions in the area also will benefit from employing residents in their communities.” After the ribbon-cutting ceremony, attendees toured the remodeled spaces. They experienced everything from the curving shapes and bright furnishings in the corridors to the quartz countertops and durable welded sheet vinyl flooring in the Phlebotomy Lab.

John Coleman, chair of MVCC’s board of trustees, commented on the new space’s effectiveness at “recreating real-world” medical environments with a hands-on curriculum.

The Sim Lab features two simulated hospital rooms with a “SimMan” mannikin that blinks, talks, breathes, and shows vital signs. While students practice in the simulation rooms, others in an adjacent observation room watch, record, and operate the mannikin. Then, instructors and peers analyze the student’s performance in a conference room. The BNAT Lab and Skills Lab each have six hospital beds around the perimeter and core classroom space with advanced audiovisual systems. A mock toilet room in the BNAT Lab offers training opportunities for would-be certified nursing assistants (CNAs), while an isolation room in the Skills Lab helps trainees learn proper care for distraught patients. Instructors also use mannikins in the Skills Lab to model scenarios ranging from high fever to liver failure.

In the Phlebotomy Lab, students collect and test blood samples. It includes blood drawing areas, a prep room, and classroom space for 24 students. The quartz countertops resist absorption of blood. 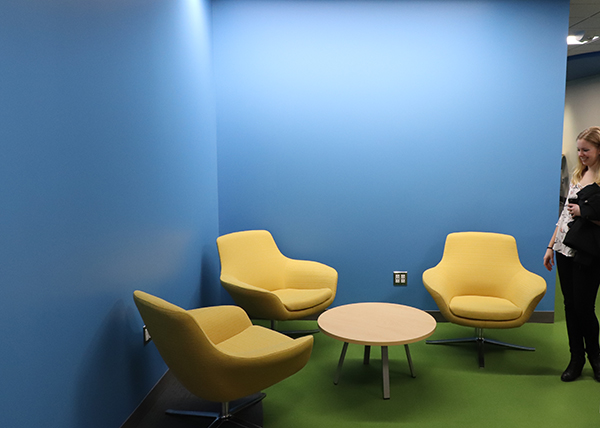 At the ceremony, Coleman also introduced the lore surrounding the city’s origins: when settlers first approached the area, they saw a blue haze rising from the earth—hence the name Blue Island. Fittingly, a calming blue appears throughout MVCC’s renovated Allied Health and Nursing spaces.

Wavy blue and green ceiling and floor patterns lead students down corridors and into classrooms. The patterns were inspired by the Legat-designed 2011 renovation, which features a yellow ribbon that undulates across the first floor ceiling. MVCC’s Marketing and Communications department designed the signage that welcomes students to the renovated labs.

The design team also collaborated with MVCC’s Marketing and Communications department, which designed the blue and green signs outside the labs.

At the end of his presentation, Mayor Vargas held up his business card. “What really caught my attention, besides the beautiful facilities and the architecture that went into them, are the colors. These are Blue Island colors!”