When the time comes to choose a site for a new police station, cost is just one of many factors to consider.

In our last post, we talked about promoting community connections by giving the police station a friendly face. However, before the discussions about building style and materials, municipalities that are building a new police station have to explore an equally important question—where to locate it?

Having led site studies for many police stations and other municipal projects, we can suggest several factors that impact site selection. Yes, cost is certainly one of them, but there are other considerations. For instance, where is the old police station located? Is it large enough to be renovated? Does it have enough property to build an addition? If not, keep in mind that even if the existing station is leveled and replaced on the same site, the municipality doesn’t have to pay for land. Can the old station be sold off or converted to another governmental use? The answers to these questions are different for every community, but what usually factors into them are history, population, and context.

Another important consideration—how close should the station be to a town center or downtown? As you will see, sometimes it makes sense to build a station in or near the less populated areas of a community. Other times, stations are best suited smack dab in the middle of a downtown.

Should the police station be single- or multi-story? The former typically requires a larger piece of land, and the village/city can save money by avoiding elevators, ramps, and grade changes. However, the downside of single-story facility is that it takes up more land, which is less sustainable.

Studies revealed that the best way to bring a new police station to Arlington Heights was to demolish the old one, then move the personnel to a rented space for a year while the new one is being built in the same place. Construction is slated for completion in fall, 2018.

Often, communities with dense downtowns choose to locate their new police stations right in the thick of things. One example is the Village of Arlington Heights, Illinois (population 75,500, incorporated 1887). Its small police station, built in the ’70s, was part of a municipal campus located amid an active urban downtown with retailers, restaurants, and apartments.

When it came time to build a new station, the village decided to demolish the old station and build a new one in its place. It makes sense—the village already owns the property, and it’s adjacent to a village hall and fire station, which allows for a higher level of cross-departmental communication. The new two-story station, designed by Legat Architects and getting built by Riley Construction, occupies as much of the site footprint as possible. The 70,500-square-foot station is slated for completion this fall. 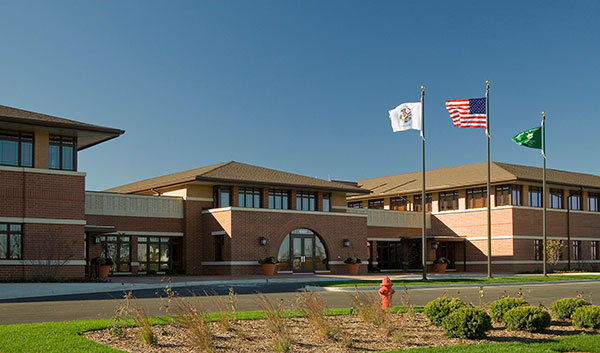 Due to its size and the availability of land, the Huntley Municipal Complex was built on a former cornfield east of the village’s downtown.

Cornfield Conversion: The Village of Huntley

About 30 miles to the west, the Village of Huntley, Illinois (population 26,600, incorporated 1872) has about the same area of Arlington Heights, with only 35% of the population.

Despite a population explosion of 324% between 2000 and 2010, Huntley still prides itself as “the friendly village with country charm.” An iconic gazebo stands in its historic town square, which is surrounded by smaller retailers and other businesses.

Huntley took a much different approach for its new police station—not only is the Huntley Municipal Complex sited on a former cornfield east of the downtown, but it also combines police and village hall functions in one facility. Even if the 52,000-square-foot facility did fit downtown, it would have dwarfed the other structures. Additionally, the large open area offers more room for parking.

Though these villages are only 30 miles apart, they exemplify how different site selection can be based on a community’s needs and composition. COVID-19 and architecture: combating coronavirus by stepping outside
By Loren Johnson