This series on police station design tips concludes with a case study that exemplifies how communities can overcome—and even use to their advantage—an unexpected setback. The classic “make lemonade out of lemons” proverb comes to mind. But in this case, the Village of Arlington Heights, Illinois has achieved something much more satisfying and longer lasting than lemonade. 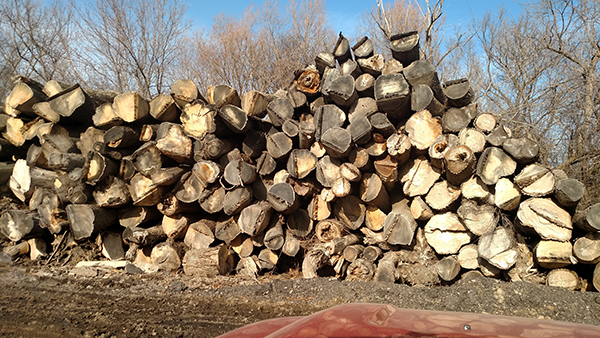 Arlington Heights stored hundreds of logs from infected ash trees at its public works campus and other village-owned lots. Closeup of wood infected by the emerald ash borer

For ten years, a predator lurked in Arlington Heights. Not a human enemy, but rather a shiny green beetle called the emerald ash borer. The invasive species burrows into ash trees and eats their tissue so the trees cannot transport nutrients and water. In the end, Arlington Heights would chop down 10,000 trees that fell prey to the insect.

Rather than dispose of the wood, the village stored it. That proved to be a wise decision: soon, the very trees that were once dying in residents’ backyards or beside village streets will rematerialize in the new Arlington Heights Police Station. On Board with Ash

After hiring Legat Architects to design and Riley Construction to build its new police station, the Village of Arlington Heights and its Public Works Department suggested there might be a way to use the felled ash trees sitting in storage. The village, Legat, and Riley participated in brainstorming sessions and quickly determined that the wood could indeed play a valuable role in the construction of the station.

“The emerald ash borers only damage trees just inside the bark, so most of the wood remains unharmed,” said Steve Blye, creative director at Legat. “Once the damaged wood is stripped away, you’re left with a durable building material with a beautiful texture.”

Construction photos of the Arlington Heights Police Station corridor. Reclaimed ash appears around the windows and in the structural decking.

A Mill and a Way

Riley Construction worked with the village to send more than 100 logs to Horigan Urban Forest Products, which cut and kiln dried boards at 1” x 4”, 1” x 6” and 1” x 8” sizes for use in trim and molding. In addition, solid wood roof decking was cut and wood “blanks” for the wood windows were manufactured. While most of the lumber was shipped back to the site where it was installed during construction of the station, the wood “blanks” were shipped up to H Window (in the aptly named Ashland, Wisconsin). H Window fabricated the wood needed to make all interior window casing, trim, and mullions.

The ash is most prominent in the more public, first-floor areas like the lobby, corridor, and community room. It appears in the door trim, windows, and tongue and groove paneling. In addition to its decorative uses, ash forms the station’s structural ceiling decking on the front, historical side of the building.

The rustic look of the community room at the Arlington Heights Police Station is due in large part to decorative and structural ash wood.

One of the biggest challenges designers of new police stations face is finding a way for the building to show strength, while also welcoming the community. Wood, perhaps more so than any other material, achieves this goal. And what better way to do it than by using existing resources?